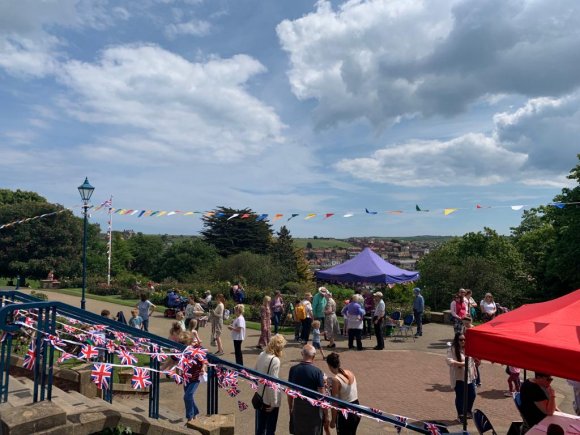 Pannett Park in Whitby was full of happy families and groups taking part in a Picnic in the Park to mark the Queen's Platinum Jubilee at the start of the long Bank Holiday weekend last Thursday.

The event was organised by Whitby Town Council with support from the Friends of Pannett Park who guided visitors through a treasure hunt through the grounds of the Park and provided side-show activities including hoopla and 'splat the rat' – which proved popular with 'pest controllers' of all ages.

The Town Mayor of Whitby was also on hand to distribute souvenir platinum jubilee badges to the younger visitors. Speaking after the event, the Mayor, Cllr. Mrs Linda Wild said,

"The Friends of Pannett Park have put on a fantastic show at this event which has been put together by the town council. The weather has been so kind to us and it's been a delight to see young and old in the park having a traditional jubilee picnic in a way you may have seen here at any time over the last 70 years."

The Pannett Art Gallery was also popular with visitors who enjoyed the temporary exhibition of a 'knitted street party', which represented hundreds of hours' work by community knitters from across Whitby and further afield.

Commissioner Zoe launches survey to measure public trust and confidence in North Yorkshire Police - Police, Fire and Crime Commissioner Zoe Metcalfe has today launched an online survey which invites the public to complete a set of questions that will ga… bit.ly/3FR2NqL