We endeavour to publicise local events and are always pleased to be contacted with details. We cannot accept any responsibilities for external information provided nor any web-links. If you wish to add your own event to the calendar, click the "Add Item" button underneath the calendar and fill out the details. 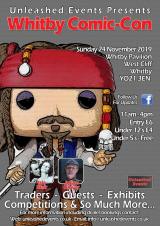 On Sunday 24th November 2019 Unleashed Events will host a geeky family-friendly fun day that you won't want to miss!

We are pleased to welcome husband and wife actors, Julian Glover and Isla Blair as our special guests at Whitby Comic-Con. Both Julian and Isla have had numerous roles in television programmes, movies and on stage over the years. Julian's film appearances include The Empire Strikes Back, James Bond, Indiana Jones and the Last Crusade (in which Isla also starred in) and the Fourth Protocol. Those who are fans of HBO's Game of Thrones will know Julian as Grand Maester Pycelle, other cult series appearances have been Doctor Who, Blake's 7 and The Avengers. Isla has had roles in Space 1999, Afterlife and Johnny English Reborn, however, Isla has acquired a large horror fan following from her role in Taste the Blood of Dracula starring alongside Christopher Lee. Isla very rarely makes comic-con appearances so we are excited that she has decided to come to Whitby!

Staying with Julian's Harry Potter theme we have the scariest spider of them all…..Aragog! You might not be able to fit a glass over this huge arachnid but you can grab a photo or two! Dare you sit in the Shocker Chair? Make sure you take a photo as proof to impress your friends and family! Prefer your photo op's to be with something less scary then check out Daisy, our 12ft friendly dinosaur…she is always available to make you smile! Everyone needs a Superhero now and then and we will have plenty on the day for you to meet and 'high-5'!

"The best family orientated comic-con around, all set in the stunning town of Whitby….what more could you ask for?!"

Don't just take Captain Jack's word for it come along and see how much is on offer including special effects make-up, VR gaming, a vintage toy display, and the opportunity to meet self-published comic authors and illustrators. We will be raising money for Cancer Research UK by holding a raffle and tombola as well as holding cosplay competitions with some fantastic prizes for those who like to come along in character. To top it off, there will be geeky traders with tons of geeky toys, comics, collectables, art, jewellery, anime, gaming and so much more….there is something for everyone!

Who are the special movie guests?

Where can I find out more about the event?

Yes! These allow you early entry and to queue jump. Visit our webpage unleashedevents.co.uk or purchase from www.whitbypavilion.co.uk

Do I need a ticket to attend?

No, just pay on the door from 11am

Yes, in the Pavilion cafe all day.