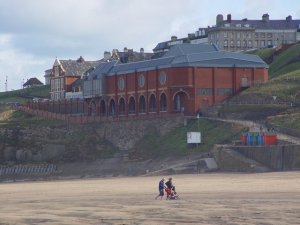 Whitby Town Council has resolved to take all reasonable steps to secure the continuing operation of the Whitby Pavilion for the benefit of Whitby.

The town council has a concern for the continuing operational stability of Whitby Pavilion as an important community asset, following the announcement on 6 July by SIV, the operator, that Whitby Pavilion was likely to remain 'mothballed' and that the company had started a process of consulting staff about potential redundancies.

Councillors have taken the decision to write to Scarborough Borough Council to ask what actions which the borough council is taking in relation to Whitby Pavilion in response to the operational performance of its contractor SIV.

Speaking after the town council meeting, the Town Mayor of Whitby, Councillor Linda Wild, said, "The town council has a legitimate concern for the future of Whitby Pavilion. It's an important community asset. We want to show our support for the Pavilion's staff, for the local users of the building and for the important part it plays to Whitby's visitor economy. We stand prepared to take any reasonable steps to support the community in Whitby in assuring the future of the Whitby Pavilion and in working with the borough council to do so."

Notice of Conclusion of Audit - Annual Governance & Accountability Return for the Year Ended 31 March 2021 Sections 20(2) and 25 of the Local Audit and Accountability Act 2014 Accounts and Audit Regulations 2015 (SI 2015/234) The audit of accounts for W… bit.ly/3zNSywS

Market Place Toilets - Over the weekend we have had a major flood at the Market Place public toilets. Yorkshire Water have been out to rectify the situation twice as the problem reoccurred overnight –it is possible the problem may have originated in a… bit.ly/2WWiLfa

Consultation on: Barriers to Renewable Technologies - Scarborough Borough Council is inviting responses to its survey to identify any potential barriers that would prevent you from installing energy efficiency measures Closing Date: 31 October 2021 The… bit.ly/3mkmdL4