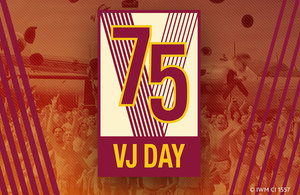 VJ Day is marked every year on 15 August to commemorate the formal end of WWII with the surrender of Japan on this date in 1945.

Unfortunately, Victory over Japan 75 years ago brought mixed emotions for those fighting in the malaria ridden jungles of the Far East. Relief and joy that the end of the war had finally arrived, but sadness at the human cost. Those who had fought on through the final three months, largely forgotten by people at home, could finally look forward to returning to their loved ones, and some sort of normality. But for many who had toiled for years in the brutal battlefields, or been prisoners, the end of the war didn't mean the end of their suffering. The memories of what they endured and the loss of their comrades would live with them, forever.

To mark the 75th Anniversary of VJ Day (Victory over Japan) The Red Arrows will perform a UK-wide flypast over Edinburgh, Belfast, Cardiff and London. They will also make a special pass of the Royal Hospital Chelsea, for the three Burma Star recipients who live there, and there will be multiple official events led by the royal family, starting with a two-minute silence led at 11am by Prince Charles and the Duchess of Cornwall.

The televised silence is part of a service held between 9:30am and 11:30am that will be led from the National Memorial Arboretum in Staffordshire. Churches across the UK will then ring a single bell 75 times from 11:10am after the Cry for Peace as the service concludes.