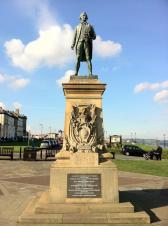 Captain James Cook and the Bark Endeavour are synonymous with Whitby. Cook was a navigator and an explorer who brought the world closer together in the Eighteenth Century and bound Whitby forever to communities across the globe. He charted the southern oceans and expanded scientific knowledge through his voyages. Whitby is proud of James Cook and proud of its maritime history. It is by recognising that our past was an imperfect time that we can tackle today's inequalities and work to build a better future together. Whitby celebrates James Cook because he will always belong here.

Civic Service - There will be a civic service held at St Mary's Church Whitby, at 2:30pm on Sunday 18 September. The service will be in commemoration of Her Late Majesty Queen Elizabeth II. The service, which will be led by the Reverend Michael Gobbett,… bit.ly/3BBuxxc