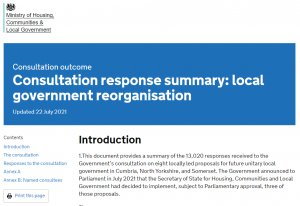 The Government has published a summary of the 13,020 responses received to the its consultation on eight locally led proposals for future unitary local government in Cumbria, North Yorkshire, and Somerset.

The Government announced to Parliament in July 2021 that the Secretary of State for Housing, Communities and Local Government had decided to implement, subject to Parliamentary approval, three of those proposals, including a proposal for a single unitary council for the whole of the area of the administrative county of North Yorkshire.